The Minuteman Bikeway is a Millennium Trail, designated by the White House. 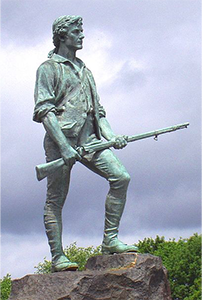 The Minuteman Bikeway passes through the historic area where the American Revolution began in April 1775.

Today, the Minuteman Bikeway is one of the most popular and successful rail-trails in the United States, enjoyed for both healthy recreation and transportation.

The bikeway has become a new type of “Main Street” where neighbors and strangers alike come together while riding, walking, or skating on the path.

In 2008, Rails-to-Trails Conservancy inducted the Minuteman Bikeway into the national Rail-Trail Hall of Fame.

Built by the Commonwealth of Massachusetts on an inactive railroad right of way, the Minuteman Bikeway has become a treasured regional resource, used by local residents and visitors from near and far.

Connecting to the Alewife “T” Station in Cambridge, the bikeway provides an easy way for bicyclists and pedestrians to travel to and from subway and bus lines, serving to reduce automobile traffic in the area.

The bikeway is collectively managed and maintained by the four communities it passes through: Bedford, Lexington, Arlington, and Cambridge. 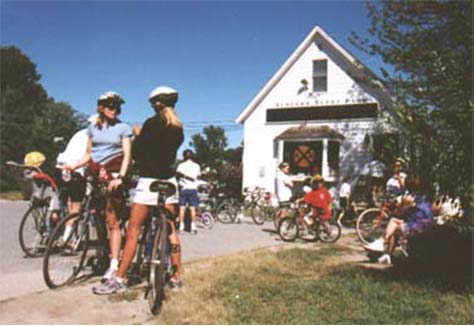 Cyclists stopped for a break at the bikeway’s terminus in Bedford. Refreshments and railroad-related souvenirs are available in the Bedford Freight House. (Photo courtesy of Friends of Bedford Depot Park.)